Visual interpretation of scientific data enhances the comprehension of the data. Scientific data is typically obtained from scientific instruments such as sensors and imaging devices, and from simulations. The data is often represented as scalar functions that assign a real value to points in a geometric domain. For example, data obtained from a CT scan is in the form of points that occupy a 3-dimensional grid, the function value at each point being its radiodensity. Advances in computational resources has primarily resulted in increasing the size of data that is available for analysis. Constructing a meaningful abstraction of such data results in not just decreasing its size, but also helps ease the analysis. In this project, we study one such abstraction known as the Reeb graph, which abstracts the topology of the underlying data.

A level set consists of all points where the function attains a given value, called the iso-value. Level sets are used extensively to visualize three and higher dimensional scientific data. The Reeb graph tracks topology changes in level sets of a scalar function, and therefore provides a good abstraction for the given data. Reeb graphs and their loop-free version, called contour trees, have a variety of applications including topology-based shape matching, topological simplification and cleaning, surface segmentation and parametrization, and efficient computation of level sets. The Reeb graph serves as an effective user interface for selecting meaningful level sets, for designing transfer functions for volume rendering and for exploring high dimensional data. 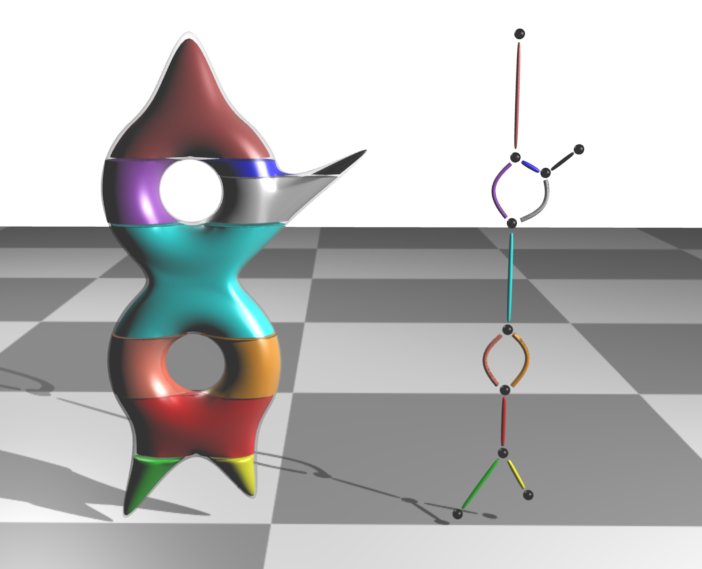 Reeb graph of the height function defined on a solid 2-torus. Reeb graph tracks the topology of level sets.

Rapidly increasing data sizes and the interactivity requirement in the above-mentioned applications necessitate the development of algorithms for fast computation of Reeb graphs that are capable of handling relatively large input sizes. The primary focus of this research was to establish an efficient and fast algorithm to compute Reeb graphs. To that effect, we propose the following three algorithms that compute the Reeb graph of a scalar function in any dimension.

Effective visualization of Reeb graphs is crucial for its application to noisy or feature-rich data. We accomplish this by addressing the following two important issues.

We also developed a software which allows users to interactively explore 2D and 3D scalar fields using the Reeb graph.

Additionally, we introduce topological saliency, a notion of importance that captures the relative importance of a topological feature with respect to other features in its local neighborhood. We demonstrated the advantage of using topological saliency along with the Reeb graph in several applications, including key feature identification, scalar field simplification, and feature clustering.