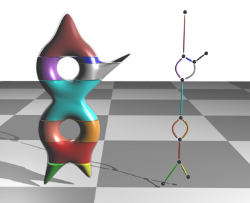 Level sets are extensively used for the visualization of scalar fields. The Reeb graph of a scalar function tracks the evolution of the topology of its level sets. It is obtained by mapping each connected component of a level set to a point. The Reeb graph and its loop-free version called the contour tree serve as an effective user interface for selecting meaningful level sets and for designing transfer functions for volume rendering. It also finds several other applications in the field of scientific visualization.

In this thesis, we focus on designing algorithms for efficiently computing the Reeb graph of scalar functions and using the Reeb graph for effective visualization of scientific data. We have developed three algorithms to compute the Reeb graph of PL functions defined over manifolds and non-manifolds in any dimension. The first algorithm efficiently tracks the connected components of the level set and has the best known theoretical bound on the running time. The second algorithm, utilizes an alternate definition of Reeb graphs using cylinder maps, is simple to implement and efficient in practice. The third algorithm aggressively employs the efficient contour tree algorithm and is efficient both theoretically, in terms of the worst case running time, and practically, in terms of performance on real-world data. This algorithm has the best performance among existing methods and computes the Reeb graph at least an order of magnitude faster than other generic algorithms.

We describe a scheme for controlled simplification of he Reeb graph and two different graph layout schemes that help in the effective presentation of Reeb graphs for visual analysis of scalar fields. We also employ the Reeb graph in four different applications – surface segmentation, spatially-aware transfer function design, visualization of interval volumes, and interactive exploration of time-varying data.