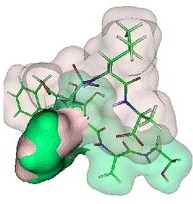 Results: The method is evaluated in four settings. First, we establish performance using known alignments with varying overlap and noise values. Second, we compare the method with SurfComp, an existing surface alignment method. We show that we are able to determine alignments reported by SurfComp, as well as report relevant alignments not found by SurfComp. Third, we validate the ability of MS3ALIGN to determine alignments in the case of structurally dissimilar binding sites. Fourth, we demonstrate the ability of MS3ALIGN to align iso-surfaces derived from cryo-electron microscopy scans.

Conclusion: We have presented an algorithm that aligns Molecular Surfaces based on the topology of surface curvature. A webserver and standalone software implementation of the algorithm available at http://vgl.csa.iisc.ac.in/ms3align.