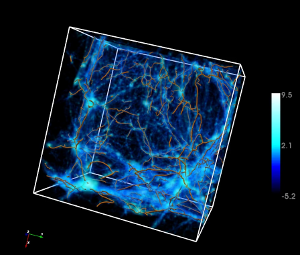 Felix: A topology based framework for visual exploration of cosmic filaments.

The large-scale structure of the universe is comprised of virialized blob-like clusters, linear filaments, sheet-like walls and huge near empty three-dimensional voids. Characterizing the large scale universe is essential to our understanding of the formation and evolution of galaxies. The density range of clusters, walls and voids are relatively well separated, when compared to filaments, which span a relatively larger range. The large scale filamentary network thus forms an intricate part of the cosmic web.

We apply Felix to computer simulations based on the heuristic Voronoi kinematic model and the standard LCDM cosmology, and demonstrate its usefulness through two case studies. First, we extract cosmic filaments within and across cluster like regions in Voronoi kinematic simulation datasets. We demonstrate that we produce similar results to existing structure finders. Second, we extract different classes of filaments based on their density characteristics from the LCDM simulation datasets. Filaments that form the spine of the cosmic web, which exist in high density regions in the current epoch, are isolated using Felix. Also, filaments present in void-like regions are isolated and visualized. These filamentary structures are often over shadowed by higher density range filaments and are not easily characterizable and extractable using other filament extraction methodologies.