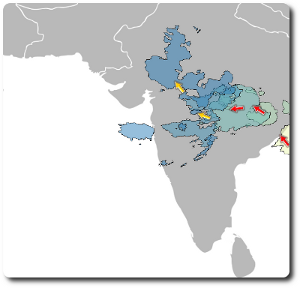 An exploration framework to identify and track movement of cloud systems.

We describe a framework to explore and visualize the movement of cloud systems. Using techniques from computational topology and computer vision, our framework allows the user to study this movement at various scales in space and time. Such movements could have large temporal and spatial scales such as the Madden Julian Oscillation (MJO), which has a spatial scale ranging from 1000 km to 10000 km and time of oscillation of around 40 days. Embedded within these larger scale oscillations are a hierarchy of cloud clusters which could have smaller spatial and temporal scales such as the Nakazawa cloud clusters. These smaller cloud clusters, while being part of the equatorial MJO, sometimes move at speeds different from the larger scale and in a direction opposite to that of the MJO envelope. Hitherto, one could only speculate about such movements by selectively analysing data and a priori knowledge of such systems. Our framework automatically delineates such cloud clusters and does not depend on the prior experience of the user to define cloud clusters. Analysis using our framework also shows that most tropical systems such as cyclones also contain multi-scale interactions between clouds and cloud systems. We show the effectiveness of our framework to track organized cloud system during one such rainfall event which happened at Mumbai, India in July 2005 and for cyclone Aila which occurred in Bay of Bengal during May 2009.