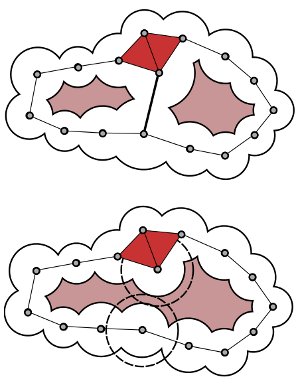 Extraction of robust voids and pockets in proteins.

Topological methods have been successfully used to identify features in scalar fields and to measure their importance. Voids and pockets in a protein refer to empty spaces that are enclosed by the protein molecule. Existing methods to compute, measure, and visualize the voids and pockets in a protein molecule are sensitive to inaccuracies in the empirically determined atomic radii. This paper presents a topological framework that enables robust computation and visualization of these structures. Given a fixed set of atoms, voids and pockets are represented as subsets of the weighted Delaunay triangulation of atom centers. A novel notion of (ϵ,π)-stable voids helps identify voids that are stable even after perturbing the atom radii by a small value. An efficient method is described to compute these stable voids for a given input pair of values (ϵ,π).